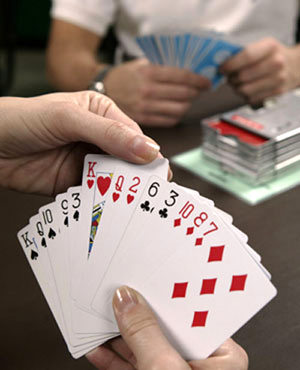 Ever wonder why expert players seem to be able to see through the backs of your cards? Why they’re so successful in finding the right lead, locating missing honors, guessing the distribution of their opponents’ cards?

The answer is that they’re usually not guessing. Whether they’re defending or declaring, successful players are constantly gathering clues from the bidding and play and using them to make logical assumptions about the location of the unseen cards. This exercise – some call it a talent -- is often called card reading, and it’s a skill that even beginners can develop.

The most basic form of counting is keeping track of the cards your opponents play as you’re leading one suit. At the expert level, “getting a count” involves visualizing the length and strength (honor holdings) of all four suits in all four hands.

To do this successfully, you need memory and reasoning skills, which will improve with practice, and knowledge of how to collect and analyze the clues. Most important, though, is effort and concentration.

Counting isn’t easy, and it can be tiresome. You have to force yourself to study every trick and constantly modify your picture of the unseen hands. Your bridge results may even suffer at first because your attention is focused on the counting instead of the play.

The benefits, however, are worth the effort. Playwright George S. Kaufman, who was a skilled rubber-bridge player, wrote:
“Counting to a bridge player is similar to an actor learning his lines – it does not guarantee success, but he cannot succeed without it.”

For some, the biggest hurdle in developing their counting skills is a lack of self-discipline. It’s easy to let your concentration lapse, especially on deals where it may appear that you’ll have no decisions to make. Anyone who’s ever been caught in a “pseudo-squeeze” – where declarer is running tricks and you have no idea which winner you should keep – knows how important it is to stay alert and keep counting.

I learned this early in my bridge education, from a more experienced partner who employed the Socratic method. At unexpected times during the bidding or play, he would stop the proceedings and quiz me: “How many diamonds does declarer hold?” “Who has the club ace?” The fear of not being able to offer an intelligent answer became a strong incentive for me to pay attention to every trick and signal.

Of course, you can’t do this in a club game or tournament, but you may find it an effective motivator to imagine the same scenario at your table. Just assume that your partner – or anyone who is judging your bridge skill -- might interrupt the play at any time to ask you similar questions, and that you have to be ready with answers.

If you need more inspiration, consider this observation from bridge great Victor Mollo:
“Learning to count out a hand is like plunging into a cold bath – difficult and a little frightening until you get into the habit. Then it comes quite easily, and leaves you with a pleasant, tingling sensation when it is all over.”

If you haven’t been a devoted counter in the past, you can speed your progress by using memory aids and other techniques that will help “train” your brain to handle counting tasks. Here are some to try:

Memorize the common distribution patterns of a bridge hand -- 4432, 4333, 4441, 5332, 5431, 6322, etc.  (Note that all the patterns fall into one of two even-odd combinations: three even numbers and one odd, or three odds and one even.) Drill yourself on the patterns until they’re so familiar that you won't have to do arithmetic once you get a partial count. If you learn that each opponent holds four cards in a suit and you hold two, you’ll instantly know partner has three because the 4432 pattern will pop into your head.

Concentrate on how the unseen cards divide. Once you become proficient in recognizing the patterns, start thinking about not just the number of outstanding cards in a suit, but how they might break. If your hand and dummy have eight total cards in a suit, focus on the possible divisions of the missing cards. With practice, it will become second nature to go beyond thinking "5" and start thinking "3-2, 4-1, 5-0".

Use a mnemonic to commit the original layout to memory.  Study the dummy at trick one and create a mental picture of its distribution (left to right, as the suits are arranged on the table). Repeat the pattern in your head, using two numbers instead of four (a 3-5-3-2 hand is memorized as 35-32), then do the same with your own hand. Later in the play, if you can’t remember how many cards of a suit are still out, you can often figure out how many times the suit was led by recalling the number of cards you and dummy originally held.

Count missing cards instead of the whole suit. When counting just one suit, start with the number of cards you’re missing and count down to zero. If you have a 7-card fit and both opponents follow to the first lead, you would mentally count “6-5”. Many players find this easier than the alternative of counting “up” from 8 to 13.

Focus your count on just one unseen hand. If you’re trying to determine the distribution of all four suits in the opponents’ hands, deal with just one hand at a time. The easier hand to count will usually be the one that made the most bids during the auction, especially if it showed a long suit, or made the opening lead. Once you know the shape of that hand, it will be easy to work out the distribution of the other.

Practice, practice, practice. It will take time and lots of experience before you can process all the information available and make the right conclusions. That will happen faster if you make a concentrated effort to count at least one or two suits on every deal. The more hands you play and the more suits you count, the more adept your brain will become at remembering the cards.

Your stint as dummy is a perfect practice opportunity. Try analyzing the bidding and opening lead, then watch the played tricks and defenders’ signals and see if you can develop an accurate picture of the other three hands. This is a more challenging exercise than “regular” counting because you can see only one hand, but it’s also less taxing because there’s no pressure to get it right.

But ... don't overload your neurons. On many deals, you won’t need to keep track of all four suits. Early in the play, decide which suits are critical and which can be ignored. If you’re declaring, focus on counting the opponents’ cards in your longer fits -- the one or two suits where you and dummy have the most cards.

If you're a defender, start your count with the suit your side has bid or led, then try figuring the distribution of one of declarer’s suits. A good choice will be a suit that may present you with a problem later in the play – you hold the ace and dummy, on your left, has KJxxx, for example.

Collecting and analyzing the clues

Start counting during the auction. Begin visualizing each player’s suit length and overall strength during the first round of bidding. Consider not just what the hidden hands actually bid, but what they did not bid. Refine your picture with every subsequent call and review it before you play to the first trick. Some simple examples:

Process information as soon as it becomes available. Don’t wait until you have to make a decision to add up what you know. Once play begins, look for clues in every trick and incorporate them into your count before you play to the next trick. When it’s time for you to make a critical play or discard, you’ll be able to do it smoothly, without giving away information about your problem.

Look beyond the obvious.  Keeping track of the cards as they’re played is the simplest, most objective form of counting. Another purpose of counting is to figure out the most likely location of cards that haven’t yet been played. Called card reading, this requires using all the available clues to come up with an inferential count – a picture of the layout based on logical assumptions about the opponents’ hands.

Positive inferences are the easiest to identify, and many are fairly routine. You play the opening bidder for a missing ace, for example, or you use information from the opening lead to figure how a suit is divided in the opponent’s hands.

Dig deeper to find negative inferences. Valuable information can also be gathered by analyzing bids and plays that were not made. Expert counters uncover these negative inferences by asking themselves “why” questions: Why didn’t West lead his heart suit? Why is East pitching clubs instead of spades? Why didn’t the opponents ever bid with their 10-card spade fit?

Against good opponents, questions like these will usually have logical answers. If you know what to look for and if you can draw the right inferences, you may be surprised to find that you, too, have developed x-ray counting vision.

In Part 2:  At-the-table counting tips for declarer and defenders